Scot is an award-winning illustrator and author. His books have been translated into languages including French, Korean, Chinese, Finnish, Arabic and Dutch.

He has worked with the National Film Board of Canada and had his illustrations exhibited at the National Gallery of Canada.
Scot mostly writes and illustrates books but he also enjoys the wild world of editorial illustration and cartoons (maybe they're the flip side of kid's books.)

As a freelancer Scot has been able to pack up his office and work in cities like Athens, Berlin and Honolulu. He stays for a few months, convincing himself (he's quite impressionable) that he lives there. He actually lives in Vancouver.

www.scotritchie.com
^ you are here already, no need to click this 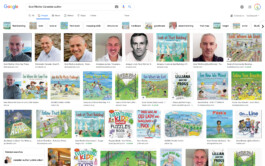 Where can you find my books?